Photo storage is a common problem nowadays, especially for those who like to take a lot of photos to capture the moment. While we can upload these mementos to our computer’s hard drive, there’s no reassurance that they will remain safe there.

To help counter this, the photo stick USB was created. The photo stick device similar to your regular flash drive but only different that it’s dedicated to backing up your photos. Its initial version was meant for backing up photos and videos found on your computer, but the prevalence of mobile phones has led to a photo stick mobile version. This makes the photo stick USB one of the most convenient features here.

Want to know more about this but are too tired to search for photo stick mobile reviews?
To help you further understand what Photo stick is and why it’s a good investment for photography enthusiasts everywhere, check out this in-depth review about it. It will put into detail everything you need to know – from its difference from regular USB flash drives to which is the best photo stick available.

What is a photo stick?

A photo stick is a device that was designed for photo backup where your files can be saved in a quick and convenient way. It functions similarly to other storage devices but dedicated to backing up and storing only images and video files.

They are another alternative to traditional storage devices. It’s allowing you to keep your precious memories safe and secure in the event your computer’s hard drive or mobile phone’s built-in storage crash.

Yes, they do and they are quick, reliable, and quite easy to use too. While most people immediately notice its appearance’s similarity with regular USB flash drives, photo sticks share more than just appearance.

In terms of usage, the photo stick works similarly to USB flash drives. Like the latter, all you need to do is to plug it into your device and you can start backing up your important photos and videos. However, unlike typical USB flash drives, this photo stick USB has built-in software. This software automatically searches for and detects all the photos and videos stored on your computer.

Depending on how many files you have and how large the hard drive of your computer is, a thorough scan of it can take somewhere around 60 seconds to a few minutes at most.

What’s great about this is that not only it is quick and easy to use. Even those who aren’t tech-savvy can figure it out. The photo stick also allows you to find and back up images and videos you thought you had lost forever. All of these are done automatically by its built-in program, making this photo backup feature a great plus.

You no longer have to search for the folders and the images they contain manually as photo sticks do it for you.

Which is the best photo stick?

One of the most common questions photography enthusiasts want to know is which photo stick is the best photo stick. There are a few models out there since its inception. The best model would still have to be the ThePhotoStick with a maximum of 128GB worth of storage. 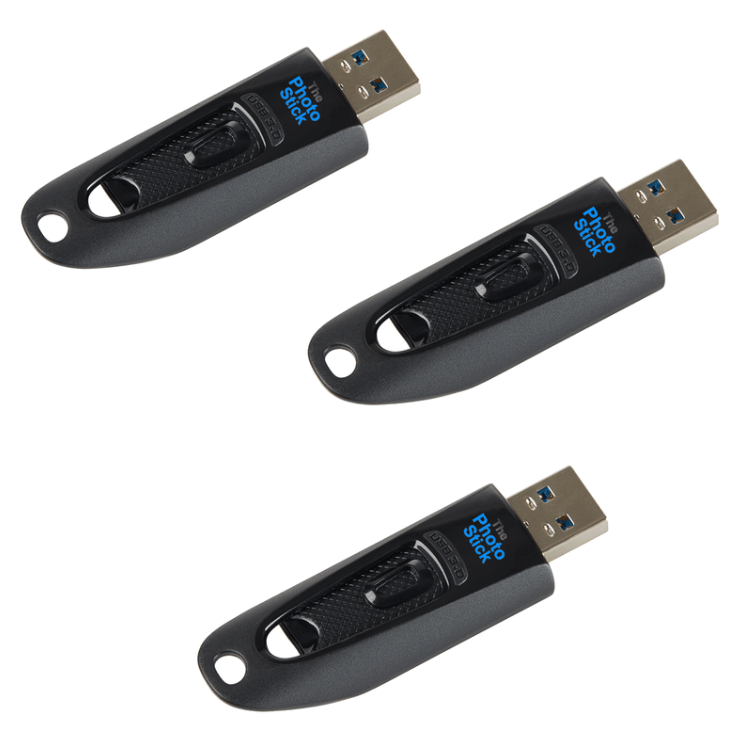 ThePhotoStick features built-in software that enables it to search for and photo backup a maximum of 128GB worth of photos and videos. It’s allowing you to keep your precious memories safe and sound. With ThePhotoStick, you can rest assured that you have a backup in case your computer crashes and the hard drive is wiped.

It’s compatible with both Windows PCs and Apple Macs. The photo stick allowing you to access your captured photos no matter what platform it is. Moreover, not only is it capable of recognizing and saving JPEG, MOV, and MP4 files, but it can also read and save other file types like PNG, AVI, RAW, and many more.

All you need to do is plug it in and click “Go” on the popup that appears, allowing it to scan and back up all the photos it can find and save on its 128GB storage capacity. ThePhotoStick also has smaller storage capacities, available in 8GB and 64GB for those who want something smaller.

While ThePhotoStick is originally only meant for computers, the developers have also recently created a photo stick mobile which offers you everything ThePhotoStick has to offer but only for your mobile phones.

What are the differences between a photo stick and a flash drive?

Considering they are similar in appearance and function, many are confused as to the difference between the photo stick and a flash drive.

In this section, we will highlight the differences between the two and hopefully, that will help you and other readers better understand the benefits of having dedicated photo storage.

First, let’s dive into the details of what flash drives do as these are some of the most common types of storage devices available. So, what is a flash drive?

A flash drive is a type of storage device that’s smaller and more portable than a traditional hard drive or optical disc drive. A USB flash drive can be connected to your computer via a USB type-A plug which allows it to access the data stored on your computer.

Compared to other types of storage devices, a USB flash drive often allows for faster data transfer speeds, eliminating much of the waiting time present with storage devices like CDs and allowing you to transfer your data to and from your computer in a hassle-free manner.

As such, like photo sticks, it can be used to store your photos and videos as well as other file types like audio, documents, and even software. However, if you want to store only photos, you will have to manually search for them and drag them over to the flash drive’s window.

Nevertheless, a USB flash drive is a great portable and versatile storage device and comes in a wide range of storage capacity, from 1GB to a whopping 1TB. 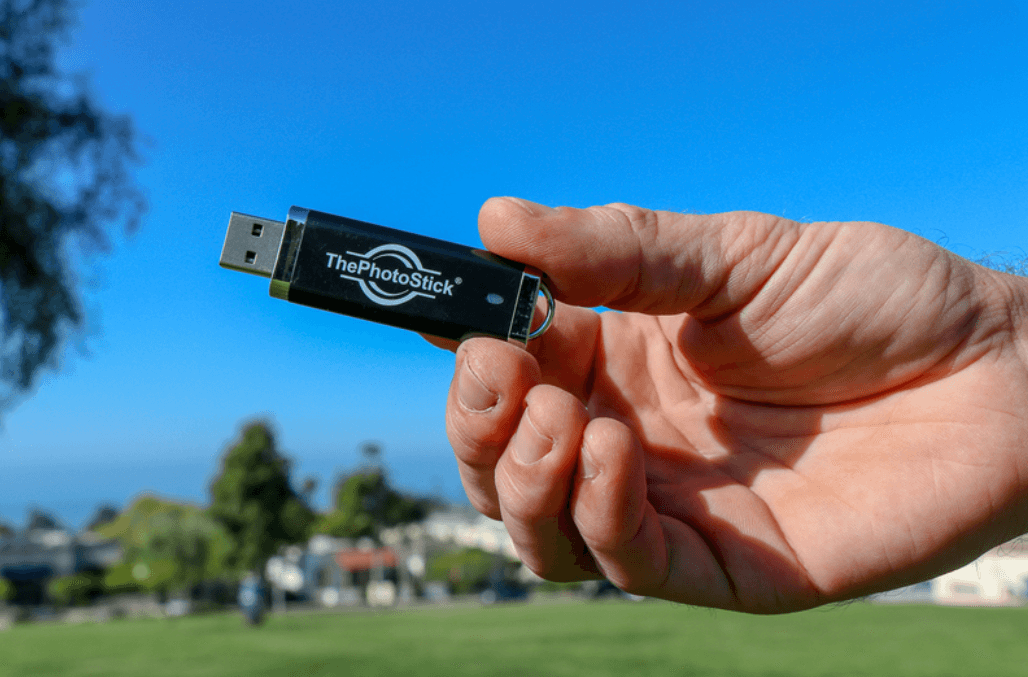 As mentioned, they share the same appearance with USB flash drives and the manner of accessing them is the same as well. However, unlike the typical flash drive, photo sticks have built-in software that allows them to scan your computer and locate all the photos and videos stored on it.

As such, it makes backing them up easier and faster as you no longer have to manually look through every folder. Moreover, this built-in software also allows for faster transferring of these photos, doing so in mere minutes. In addition to this, they also allow you to find photos and videos you thought was lost forever.

Although the storage capacity isn’t as varied as flash drives, products like ThePhotoStick gives you more than enough storage to back up as much as 60,000 average-sized photos in its 128GB capacity.

If you want a separate storage device for your photos but still want the portability of flash drives, then the photo stick is worth checking out.

Differences between a Photo Stick USB and USB Flash Drives

Another major difference would be the presence of built-in software in photo sticks that allow them to easily locate all your image and video files on your computer.

How much does a photo stick cost?

Depending on the brand and storage capacity, a photo stick can come in a variety of price ranges. For example, ThePhotoStick has 3 varieties to choose from and each one has a different price.

While it’s a bit pricier than regular USB flash drives, it’s definitely worth it if you’re looking for something that’s dedicated solely to backing up and storing your precious memories.

If it’s more expensive than a USB flash drive, then you might be wondering why you should invest in one. After all, can’t you just buy a USB flash drive and store your photos and videos there? 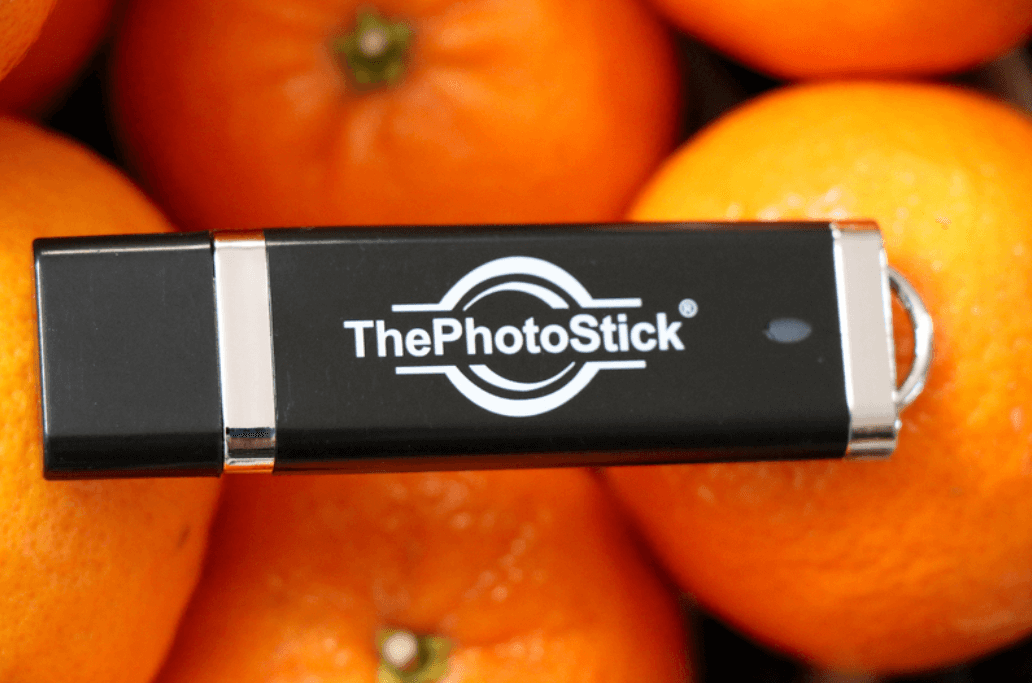 Here are some of the reasons why photo sticks, particularly ThePhotoStick, are a worthwhile investment.

There are photo stick mobile versions that are compatible with Android and iOS devices as well.

Here are some of the most commonly asked questions about ThePhotoStick.

1.      Is it possible to use ThePhotoStick on more than one device?

Yes, it’s possible to use ThePhotoStick on more than one device.

Since ThePhotoStick is compatible with both Windows PCs and Macs, you won’t experience issues when trying to access your photos and videos on one device after backing them up from another. As long as it has a USB port, you can use ThePhotoStick with no problems.

2.      Does ThePhotoStick copy duplicates as well?

No, it doesn’t. ThePhotoStick goes through your entire computer and backs up all the photos and videos it finds. However, to make life easier for you, it automatically deletes the duplicates after it’s done so you won’t have a difficult time doing it yourself.

3.      How does it organize the images and videos it copies?

ThePhotoStick copies all the images and videos and arranges them by alphabetical order. However, what it doesn’t do is sort it into folders and such.

An “average-sized” image has a file size of 2MB. This is roughly based on the size of an 8MP jpeg photo and is the basis of ThePhotoStick’s calculation of how many images their product can store.

The prevalence of smartphone cameras has enabled us to capture almost every moment of our lives, ensuring that we can preserve the moment and go back to it whenever and wherever we want.

However, this has also posed a problem when it comes to storing them as there is a limit to how much your mobile phone’s internal storage can handle. While backing these precious memories up to our computers is often the solution, it provides no guarantee that they are safe.

With that said, a photo stick is a perfect solution to your photo storage woes as it’s solely dedicated to backing up and storing your photos and videos. Among all of the available photo sticks on the market, ThePhotoStick is the best photo stick as it has all the necessary features that make backing up and securing your memories easier and more convenient. With this you won’t have to check out on photo stick mobile reviews anymore or search on the web as this one’s totally worth it.

Get the PhotoStick Now!
Summary 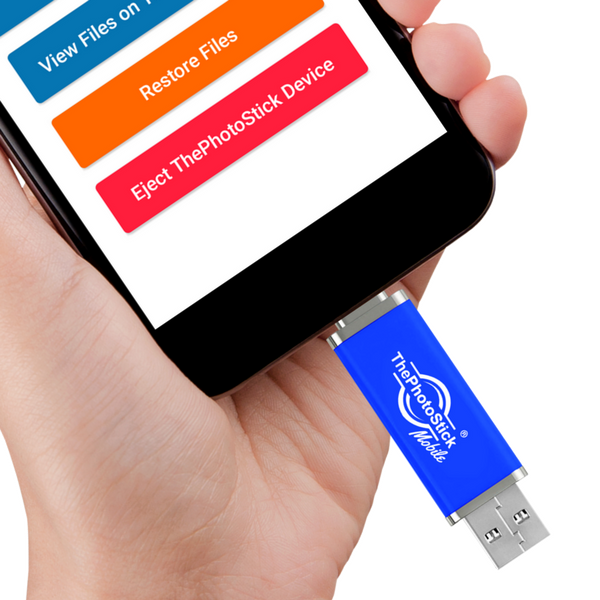 IT OFFERS YOU THE BEST

Easy To Use App

Use FIXD on the go with your smartphone and understand problems your vehicle may be having.

FIXD uses industry leading satefy protocol to make sure your vehicle and your data remains secure. Your data is your data - we don't sell this information to third parties.

Get your FIXD device Today